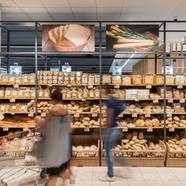 Renewal of the retail outlet in Via Cimabue, Florence

Florence - Unicoop Firenze has chosen display solutions by Cefla Shopfitting to renew its retail outlet in via Cimabue. The work was completed exactly one month after it began and the 1500 square metres of floor space have now been completely redesigned as per the project managed by the architect Paolo Lucchetta of Retail Design using Cefla shelving and checkouts.

This retail outlet is seen as vital as it lies on the edge of the Tuscan capital's historic city centre and is a “neighbourhood” supermarket that locals find easy to reach on foot or by bicycle. The renewed supermarket now has broad aisles, more accessible shelves and a “fresh produce square” that offers a clear view of everything and is reminiscent of open-air markets. Displays in the fruit and vegetable, wine and organic departments feature wooden trims reminiscent of traditional crates. The structures, open at the sides and on the bottom, allow appreciable variability in modules and in display utilisation thanks to a configuration which is highly popular with architects as it can be used to create numerous visual solutions.

In other product areas, notably perfumery, System10  shelves have been selected; these, thanks to their versatility, provide, in combination with the Evo backpanel, space savings both in the aisle and on the shelf. This increases the amount of display space while “lowering” the goods and making them more accessible to consumers.

At the Coop in via Cimabue the shelving also features special lighting produced by C-LED, the Cefla company that specialises in visual merchandising lighting technology, designed to highlight displayed goods and provide a suggestive, inviting atmosphere.

To complete the shopping experience the Florentine retail outlet has no less than 22 checkouts, of four different types, including Futura Plus.