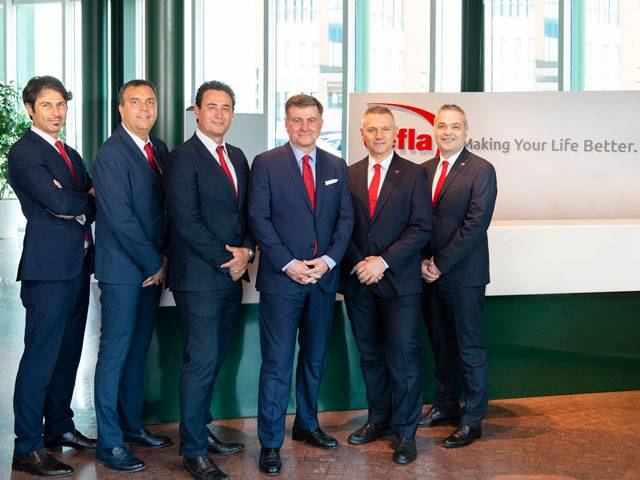 Despite the existing global economic and political uncertainty, Cefla closed 2018 with a turnover of more than 560 million euro and a positive balance of 21 million euro, confirming the upward trend (up from 13 million euro in 2017). Net income rose to 30 million euro (+ 8.1% compared to 2017). Consolidated EBITDA totalled approximately 50 million euro. 47% of income was generated in Italy, 30% in other European countries and 23% in the rest of the world.

An important share of investments, amounting to around 30 million euro, were completely self-financed, with a view to dealing with existing and future challenges as well as possible. Cefla Shopfitting implemented measures designed to improve operational efficiency, with the aim of improving operational efficiency, increasing competitiveness in the main international markets, and guaranteeing economic and financial stability within the context of expansion of the Retail sector, which represents the BU’s principal market.

Cefla’s Shareholders' Meeting, in addition to approving the Financial Statements drawn up in conformity with the IAS/IFRS international accounting standards, also confirmed the existing Board of Directors for the next three years. Chairman Gianmaria Balducci and Vice-Chairman Claudio Fedrigo were also confirmed.

Chairman Balducci: “Objectives achieved in accordance with our values”

“The Board of Directors would like to thank the shareholders for their belief in us, and also to thank all of our colleagues within the Cefla Group who, through their daily work, have made it possible to translate the strategies of the managerial group and the guidelines of the Board of Directors into numbers. Most of the aims established at the beginning of the year have been reached and surpassed thanks to constructive discussions between shareholders, employees and managers and to the participation of everyone present within the company. “Over the coming years” - the Chairman Balducci stated - “Cefla will continue to be able to count on the company's distinguishing values, which have guided the company since 1932. These values drive us on in our constant striving for improvement, in our incessant pursuit of value creation, and are consistent with our mission to improve people's lives”.