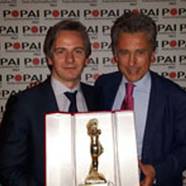 Cefla wins the “Popai Award” for its Smart Shelving System

For the category "Digital and technological innovation - proximity marketing"

Milan - Cefla and Jointag, partners in the development of the Smart Shelving System, have won the Popai Award 2016. The award, now at its ninth edition, was presented on the evening of Tuesday 24th May in Milan for the category “Digital and technological innovation - proximity marketing”, where Cefla had reached the final together with a competitor of the calibre of Unicredit. Against the suggestive backdrop of a Milan skyline, seen in twilight from the top of the Pirellone tower, the Popai jury decided to highlight how - by integrating display space with a proximity marketing platform - Cefla's “smart shelf” represents a major development in the relationship between retailer and consumer.

“The Popai Award is the jewel in the crown of a project that is of considerable importance to us on account of its undeniable innovation” stated Andrea Ventura, Managing Director of Cefla Shopfitting. “The Smart Shelving System is a doubly ‘smart’ system as it makes the shelf interactive with the customer's smartphone, infinitely expanding the opportunities for communication between retailer and consumer, and because it allows the retail outlet to minimise space requirements without reducing display capacity.”