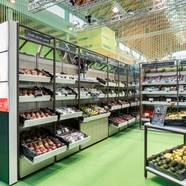 Cefla Shopfitting partecipated at Macfrut 2016 (Rimini 14 - 16 September), the international benchmark exhibition for the fruit and vegetable sector, organised by Cesena Fiere in collaboration with Agrotec.
Of special interest in the New Retail Solution section, where ways of presenting loose or packaged produce will be on display, will be Cefla’s Smart Shelving System, which received the prestigious Italian 2016 POPAI Award.

This system, which allows retailers to communicate with a customer’s smartphone, will be the star of the "Shop of the future", set up by Cefla Shopfitting throughout the area dedicated to innovation. Visitors can enjoy the experience of shopping in the produce section of the future, where communication will play a key role in providing the consumer with information on traceability, organoleptic characteristics, and usage in the kitchen.

The tiered structure proposed by Cefla Shopfitting integrates seamlessly with the shops and their logistics, ensuring that retailers can implement an eye-catching configuration that will enhance the identity of the store and the presentation of the different categories of produce being offered.

On Wednesday, 14 September, Macfrut’s opening day, Andrea Ventura, director of the Shopfitting business unit, will speak at the workshop entitled "The future of the produce section".
Starting from 10:30 am, the conference will address the issues of space and segmentation, performance and management, with a particular focus on new consumer buying behaviour, the changes taking place in the structure of sales departments and the role of technology in the dialogue between retailer and customer.

The meeting, to be held in the Macfrut Agora area in the South Hall of the Rimini Expo Centre, will also feature presentations from Roberto Della Casa, Unibo professor and Managing Director of Agroter, and Daniela Ostidich, president of Marketing & Trade. Also present at the conference will be representatives from major retail chains such as Italy'S Dimar and Rewe from Germany. Indeed, Cefla Shopfitting's expertise has been chosen by many of the leading names in retail, as demonstrated by the partnerships in the fruit and vegetable sector entered into with chains such as Carrefour in France, and Dia in Spain.